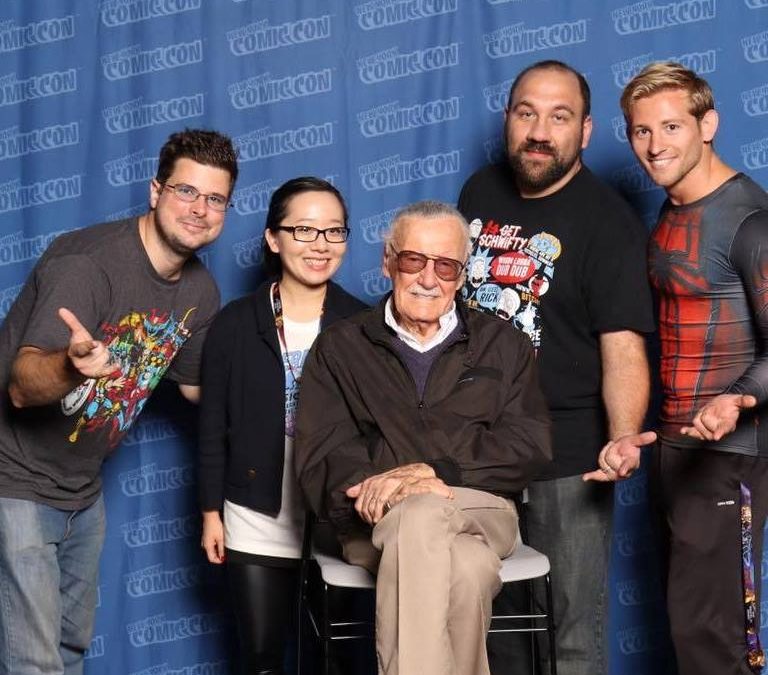 Stan Lee Inspired Us All: Celebrate His 95 Years

Stan Lee Inspired Us All: Celebrate His 95 Years.

There will never be another like Stan ‘the Man’ Lee.

It is a sad day and a joyous, for we must move forward in a world that Stan Lee no longer walks. But, thankfully, he left us with such a bevy of stories, conversations, smiles, Excelsior!’s, cameos, and teachings that we can celebrate a long-lived life that was filled with inspirational art.

The first book I remember reading on my own was a reprint of The Amazing Spider-man #1.

That comic was written by Stan Lee and drawn by Steve Ditko.

I got it out of a cereal box and that book inspired me as a four-year-old to start to write and draw my own comic books, forever shaping my life (I still have the comic too).

And make no mistake:

Stan Lee is a superhero.

He was a teenager who embellished his age to help out on Captain America and other Marvel books in 1939, not long after the publisher’s inception.

He brilliantly stepped in when a short-handed Marvel Comics called upon him to write and edit.

Stan’s charm and wit and unending creative drive led to the co-creation of some of the world’s most influential mythic figures, from the X-Men to the Fantastic Four, to the world’s first African American superhero to get his own solo title, Luke Cage, to Peter Parker the spectacular neighborhood Spider-man.

We learned in the final page of Spiderman’s first comic book appearance that “…with great power there must also come — great responsibility!” and rarely have more powerful words been so succinctly written or as influential as Stan Lee’s caption in Amazing Fantasy #15.

And Mr. Lee has for the better part of a century continued to make a mark on that modern mythology.

When he did not create the characters he breathed new life into them and brought them down paths they had never dared travel.

He traveled the world as an ambassador for reading, for making art, for fighting to improve the world through myths, for celebrating all things comics.

He made sure comic books were fun, were received, and were constantly striving for innovation.

And the kindness he received from all of his fans, all of his readers, and all of his fellow artists was reciprocated a thousand times over.

He genuinely loved the world and those in it.

And as he grew older, he did not cease this one bit.

I consider it an honor and a privilege to have spoken with Stan Lee and thanked him for what he and his work meant to me and to everyone whom he worked so hard to meet, graciously, even when he was in his nineties.

He spent hours upon hours meeting as many fans as he could.

He happily taught as part of a Smithsonian virtual comic book history class, The Rise of Superheroes and Their Impact On Pop Culture.

He continued to be a joy to as many of his fellow artists as he could spend time with.

He loved his colleagues, innumerable as they became over a nearly eighty-year career.

He understood how precious time is, and in his 95 years, he gave us everything he had and more.

To think that when I got to meet Stan, the legend, humbly smiled, almost sheepishly, as I thanked him ‘for doing this’ for ‘seeing so many people who are inspired by him’ . . . and he thanked me.

He said: “Thank you very much for saying that. That really means a lot to me.”

He smiled and he talked to me.

So much of my work is touched by this man’s art.

He started me writing.

I am forever indebted to him.

And he was kind enough, no matter how much the handlers pushed him to work harder (even in his nineties), to take a little time to speak with me.

I am deeply saddened and in shock that he is no longer here with us today.

But I am also so happy that he and his works of art make the world a better place every day and will continue to do so.

In his writing, Stan Lee’s world building used real places, like New York City, and realistic characters to be more relatable to us.

His characters were fully fleshed out, were challenged with real social issues, and felt all the conflict and failure that we do.

They were human beings first and superheroes second.

On his watch, no matter how super the superheroes were, they were human beings first.

No matter how superhuman Stan Lee, a Superhero if there ever was one, was and always will be, he was human first too.

My condolences go out to the family of Stan Lee during this difficult time.

“Stan Lee Inspired Us All: Celebrate His 95 Years” was written by R.J. Huneke.