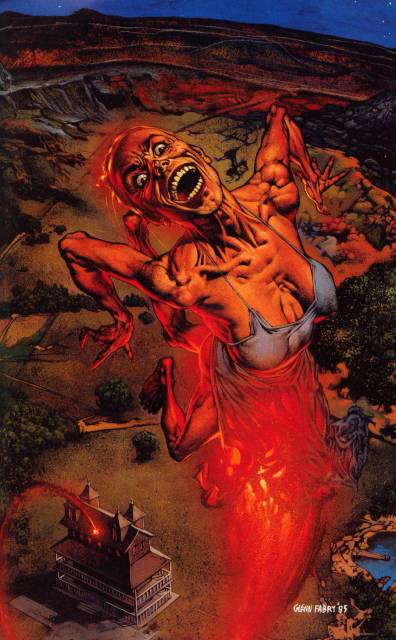 What a disappointment the end of Preacher Season 1 was. No Gran’ma.

And Marie L’Angell was missed at the start of the AMC adaptation of the Garth Ennis (writer) and Steve Dillon (art) graphic novel Vertigo series Preacher.

One of TV’s best works, in terms of capturing the spirit of the source material, the amazing acting, and the black insanity strewn perfectly across the lens, has truly been a remarkable series from the outset.

The character growth, from Cassidy’s weighing whether his conscious has business competing with a lust in everything (blood least of all), to the destined Natural Born Killers-esque lovers, Tulip and Jesse, is engrossing.

The crumbling chaos of the world of Preacher is straight from the comic books.

And it is riveting.

But after the first echelon of the show wrapped, I had one disappointment, one major letdown, amongst the incredible job they did: the show’s introduction to the epic Jesse Custer tale was devoid of Gran’ma.

The comic books were the first to carry the same writer-artist power team throughout the entirety of the series.

And their introduction added a lot of Jesse’s backstory living and learning god from the most vile, cruel and ruthless family matriarch imaginable, Gran’ma.

The show has brought a great introduction of the present day Tulip, Cass, and Custer, and now it has circled back to bring the preacher back home . . . to Gran’ma.

Her depiction starts in the shadows.

This is the trait that the great artists Steve Dillon and cover artist Glenn Fabry always struck me with the most.

The stark wrinkles full of wisdom, wickedness and woe.

At first the Gran’ma on-screen seems to be far less of a shrunken head than in the books.

But, like with all of the brilliant design, shots, and carnage in the film, Preacher adds its own touch to the mythos by giving wispy black hair, like a levitating shroud to Gran’ma so she has her own purely evil shadow or veil to add to her power, like some sick talisman.

So far Jesse has not even considered trying the Word against Gran’ma.

In the books he learns, the hard way, that she is resistant to it.

But for now, Gran’ma’s own twisted game of control, dominance, and family will play out at home.

Tulip is alive again thanks to the scraped heel flakes of Tulip’s skin that Gran’ma chews and swallows to start the process of resurrection.

Some of the woman’s tremendous power is alluded to in a flashback showing a very old prisoner, worn and in pain, that escaped Gran’ma’s captivity.

God knows what she harvested from her prisoners.

Or maybe he doesn’t. He has been largely absent until now.

Tulip is almost back to the land of the living when she is told by the creepy dog, God, that she is now his ‘chosen.’

Should we be optimistic?

Looming over them all is the demon incarnate, the quietly snarling and eerily pure evil that is Gran’ma.

To date, the adaptation is simply awesome and on-screen Gran’ma, with her slippery Louisiana accent, does not disappoint!

I cannot wait to watch more!

If you want to read all about it, and cannot wait to learn about the history because you have been locked in your own Gran’ma’s house amongst your daddy’s corpse and gators, then by all means go to your LCS (my local comic shop is Red Shirt Comics) and pick up the Preacher Vertigo comics ASAP!

Sunday is just days away!