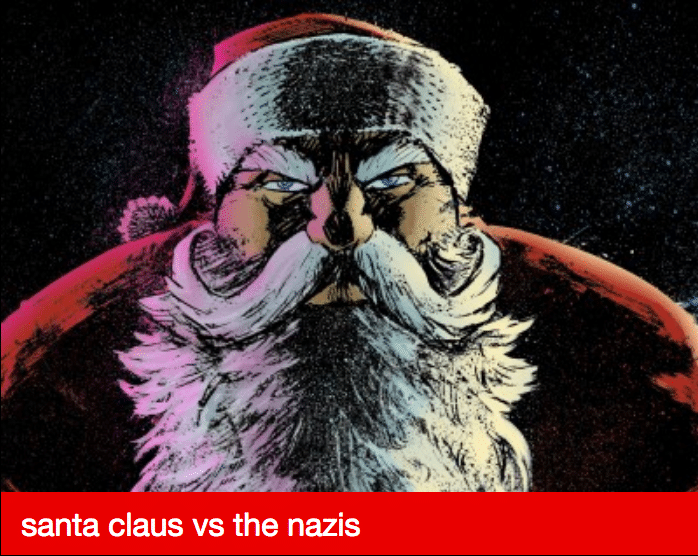 For £1 per week, in any currency, readers get volumes of up to 150 pages in seven weekly parts.

ACES WEEKLY is the seven-card stud of e-comics!

To paraphrase David Lloyd, the idea for the award-winning ACES WEEKLY came down to comics looking better [than paper] with fewer limitations [and myriad possibilities].

In the very first volume of ACES WEEKLY, the gem Valley Of Shadows takes a black and white noir tale down new twisting alleys hereto untraveled.

More on Valley Of Shadows [Plot by David Jackson and David Lloyd, and the Script and Art by David Lloyd] later after we examine the cards, I mean the ACES.

When David Lloyd, co-creator of V For Vendetta and author/artist of Kickback (and a whole lot more), first launched ACES WEEKLY, very few comic books were available in a digital format.

Those that did come in a digital form required the paying of an extra dollar to the paper version, making a $3.99 book $4.99 in your LCS for the same 21 pages of content.

Now e-comics are in the mainstream, but none have the formula of six different works delivered every Monday night in an innovative set of seven serial installments.

At a buck a week, and adding that up, seven pounds for seven weeks of stories, you get 21+ pages for each of the six titles.

That is up to 150 pages, or six or seven comic books, for less than the price of two paper comic books!

Value aside, the proof is in the product, and ACES WEEKLY’s continuous stream of e-comic books are incredible.

The art is mostly in traditional comic form and looks STUNNING on screen!

Just like the serial installments of Superman of old, in the newspaper funny pages, the ACES WEEKLY tales are mostly told on horizontal pages.

The books are, after all, only bound virtually, in Cyberspace.

There is no limitation of the reader having to hold a vertically stapled comic book.

This means that you can read in a more natural line of sight akin to watching a movie on a widescreen, in the theater or at home.

An omnivorous reader, like myself, loves the funny, the dark, the thrilling, and the wildly creative varying in voices from one comic book to the next.

ACES WEEKLY delivers a smorgasbord of quality each and every week!

Examples of this diversity are evident in the noir classic Valley Of Shadows by David Jackson and David Lloyd, the epic Santa Claus VS the Nazis by Benjamin Dickson and Gavin Mitchell where Santa Claus becomes a prisoner of the Nazis and the elves are enslaved, and then . . . on a planet in the middle of the Andromeda System . . . there is the powerful science-fiction book Dark Utopia by Mark Montague.

You could not ask for a better hand being dealt.

Think about it: Santa must break free of the Nazis to save the elves! What bigger stakes are there?

The art is unique, the writing top-notch, and the creations are made to pop out at you from the screen, no matter where you wish to enjoy the tales.

Each week you look forward to the latest installment of scintillating reading.

And in Volume One, Valley Of Shadows is one hell of a gripping whopper to kick off the experience.

Buddy Chaplin hasn’t got much going for him.

His marriage has failed, he’s in a dead end job, and he’s stopped looking for more.

But life is about to take an unexpected twist….

The art from David Lloyd is full of shadows, emotions, long blacks and stark whites.

The vivid scenes could easily make the silver screen.

The innovative use of comic book panels and art surrounding and behind the panels makes full use of the reader’s eye and the horizontal page layout for incredulity at every turn of the e-page.

The story, dialogue and plot of Valley Of Shadows are intricate, tight, and unique.

Security guard Buddy is dragged into helping someone, committing murder (in defense!), and racing against malicious and resourceful forces to save a stranger’s little girl from a horrible fate.

The villain is a megalomaniac bent on destroying a valley if that is what he needs to do to get an organ donor for his dying son.

And Buddy is just a normal guy who gambles too much, lost his own little girl and wife in a divorce, and gets caught up in a fight he should not be able to win.

The tale is utterly brilliant and it only scratches the surface of all of the ACES WEEKLY offerings.

The art is amazing, the creators on board ACES WEEKLY are extraordinary, like David himself.

For the cost of less than two paper books a reader can feast on six full length high resolution comics formatted and built for any type of screen, from a Smart TV, to a tablet, or a smartphone.

This reader is subscribing for life, and POWkabam will look to cover at least one of the many tales in each volume going forward.