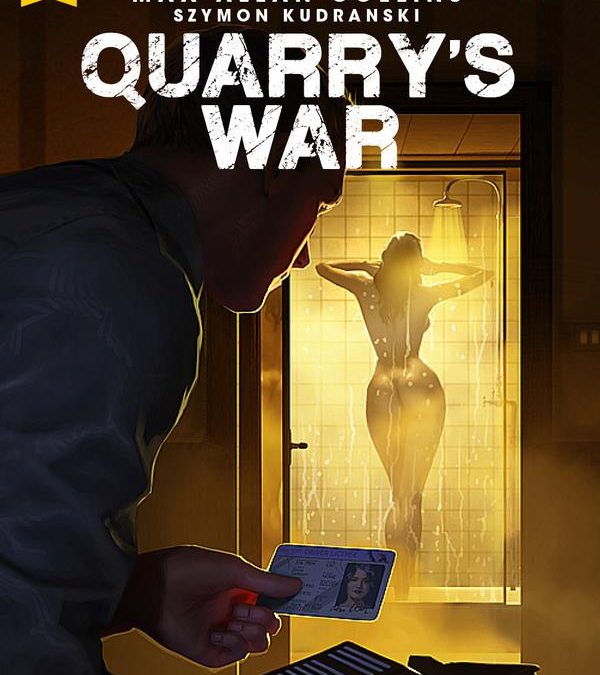 The artwork by Szymon Kudranski is compelling in its portrayal of the character Quarry, who has really no readable expression.

The poker face and the Laissez-faire attitude of the intelligent gun-for-hire with more than a semblance of a conscience is a perfect emanation of Quarry on page one of issue 1.

The insights into war, from the ‘good hunting’ diction to the portrayal of moods surrounding the American sniper team are incredibly interesting – because the snipers do not kill in battle they, like the Vietcong, are ‘strange…crawly things in the jungle’ even to their own comrades in arms.

For fans of the Quarry books, the Quarry’s War comic has backstory that Mr. Collins has never explored before on the page!

For those of you not familiar with Max Allan Collins’ oldest running series to date, we will explore the history of Quarry in detail with someone who is intimately familiar with his work, Charles Ardai.

Charles Ardai is an accomplished author, editor, noir-buff, and co-founder of the Hard Case Crime publishing company, which has in the last couple of years started to create incredible editions of graphic novels through Titan Comics, like Cynthia Von Buhler’s Minky Woodcock: The Girl Who Handcuffed Houdini.

How did it all start?

C.A.: Max Allan Collins is probably better known for comics than for anything else. He started doing Dick Tracy, the newspaper strip, for something like ten years; he took over for Chester Gould, the guy who created Dick Tracy. He crated his own comic called Ms. Tree, which I think was one of the longest running crime comics in history, and he did Batman, and a bunch of other things, but he really hit it big with a book called Road To Perdition. Road To Perdition was a stand-alone graphic novel that became an academy award-winning movie with Tom Hanks.

Aside from his work in comic books, Max Allan Collins has dozens of riveting novels, including his Nathan Heller series where a private detective with a penchant for cash becomes a high-profile private dick, as he ends up working with the likes of Marilyn Monroe and Bobby Kennedy (in Bye Bye, Baby), and Amelia Earhart (Flying Blind); the historical fiction combined with the tragic figures of legend make for addictive masterpieces.

C.A.: [Max] started Quarry in the 70’s when he was a student in college, and he never did a Quarry comic. So here’s this guy who’s been doing comics his entire life, and here’s his longest running character – [Quarry] even became a TV series – and he’s never shown up in comics.

R.J.H.: So how did this innovative noir character, a good-guy gun-for-hire finally come to comic books?

C.A.: When we started Hard Case Crime for comics, I said Max: you’ve got to do Quarry. I want to see what this guy looks like. I’ve been reading about him for thirty years!

The magic was in the making: Quarry’s mug would come to comics.

C.A.: The idea was Quarry was a soldier in Vietnam. He comes back stateside from his tour of duty, [and] he can’t get a job. The only thing he knows how to do is kill people. He was a sniper in Vietnam; and the government trained him in how to shoot people, and he has no other skills. He discovers his wife was cheating on him, and he kills the guy she’s sleeping with, and so now he really can’t get a job. And someone shows up at [Quarry’s] door and says, ‘why don’t you do for good pay what the government had you doing for pennies over in Vietnam?’, and he becomes a killer.

And three interesting twists on the hard boiled crime genre here are as follows: Quarry stands in a United States in chaos in the Vietnam War era (this was contemporary when the first books were written by Collins), the tales take place in the middle of the country, and in many rural and suburban areas – not in the atypical L.A. or New York City – and Quarry himself is utterly unique as a character in that he is as honest a killer as he is an efficient survivor.

Charles Ardai worked as consulting editor on the first comic book adaptation of the character, Quarry’s War, along with editor Tom Williams.

C.A. But what we never saw in any of the books – and this is what is so exciting – we’ve never seen his Vietnam experience…and when they did the TV show there was an episode and part of it takes place in Vietnam, and it got phenomenal reviews. But what Max is doing [with Quarry’s War] is an interesting structure [where] half of each book is set in Vietnam – and we see Quarry as a marine sniper in Vietnam – and the other half is back home after the war. And it’s done alternating pages: every left-hand page tells the story in the present day America [being July 1972 in Issue #1] and every right-hand page tells the story of Vietnam [in 1969].

R.J.H.: Was this done to invoke a sense of the parallels between the two lifestyles?

Like most of the innovative works of Collins’ career, the integration of the past and the present pose dramatic expositions in the visuals and story on the page.

The first issue is dubbed “Partners In Crime” and throughout it we get to know Quarry’s partners, both in crime in America with Boyd, who is the interesting “passive-side” of the hit team, compiling the stakeout part of their jobs, and in Vietnam with Quarry’s sniper partner, a spotter, Lance Corporal Lance Roberts ‘who took plenty of shit for the double name’ – this quote is some of Collins’ witty genius, as he shares a character’s innards in brevity.

*SPOILER ALERT
As a side note: in the very first novel in the Quarry series by Max Allan Collins, Quarry, Boyd does not make it out alive, though he has worked numerous successful jobs with Quarry.

Getting back to the comic: the current tale in America is also in Quarry’s past, and his Vietnam story is deeper into that past.

There is a connection to the soon-to-be-dead partner, Boyd, and the partner from the war.

The connection comes abruptly in the form of a twist, like a gut-shot, as the new job’s target for Quarry in America winds up being his old Vietnam spotter Lance.

The young marine who tries to smoke pot while setting up a target in the jungle, and is quickly threatened to be killed by Quarry for potentially alerting the ‘VC’ to their whereabouts if he smokes, comes to work well with the humorless sniper Quarry. But as the reader gets to know the sniper team in the Vietnam turmoil, there is a sense of foreboding. After all, Boyd is dead in the books and now Lance is supposed to be soon-to-be-dead, as Quarry’s next victim.
*SPOILER ALERT ENDING

The detail of the jungle trees, the paddy fields, and the people all seemed to be immersed in a tint of shadow that may signal the past, or just a darker world in general.

It is compelling alongside the brighter America complete with Quarry’s best stress reliever, a swim and subsequent bikini-clad dame that takes an interest in him.

*SPOILER ALERT
Even the casual one night stand highlights Quarry’s need to be cautious and meticulous: as a sexy shower curtain silhouette of the buxom companion graces the background, Quarry checks out her purse to ensure no mob ties, or guns, lie in wait.

The Vietnam mission comes without backup on the opposite page, and the brains of armed Vietnamese teenagers burst from their skulls, as the job is carried out.
*SPOILER ALERT ENDING

Quarry’s War from Max Allan Collins is a gem, as dirty and sharp as an unpolished diamond.

Grab the last issue (and the preceding ones if you do not have them yet) that just hit shelves at your local comic shop, like Red Shirt Comics.

And a gorgeous collection of the entire graphic novel Quarry’s War is coming soon!