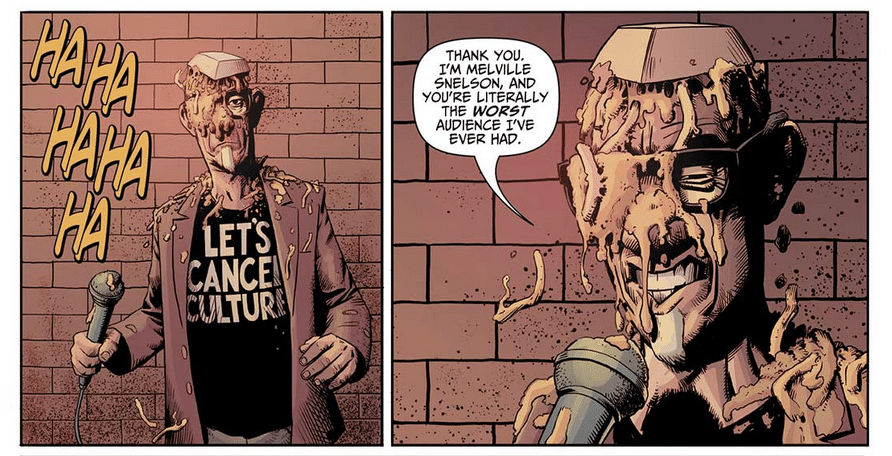 Laugh Along At Not With Snelson: PREVIEW of Snelson #4

Laugh Along At Not With Snelson: PREVIEW of Snelson #4 – this article in quotes was first published on MajorSpoilers.com:

“Cue up the laugh track! Comedian Melville Snelson doesn’t know how many oxycontins he took.

(Laughter) His shows are bombing.

(Laughter) His website is attracting trolls who threaten violence.

(Laughter) A comic he identifies with just committed suicide.

(Laughter, applause) Time for a near-death experience with the possibility of a fatal encore. (Crickets) Plus: prose & pix, AHOY-style!”

This comic series by writer Paul Constant and artist Fred Harper is a unique and brilliant take on cancel culture through the voyage of one Melville Snelson who seeks to gain infinite reaches by purposefully getting himself canceled.

No one makes art like Fred – it is extraordinary – and few write this intelligently in comics as does Paul here.

Snelson is a series for the ages, and I for one hope there will be a followup series from Ahoy Comics.

Be sure to pick up the final issues ASAP!

Check it out Via AHOY COMICS here http://www.comicsahoy.com/