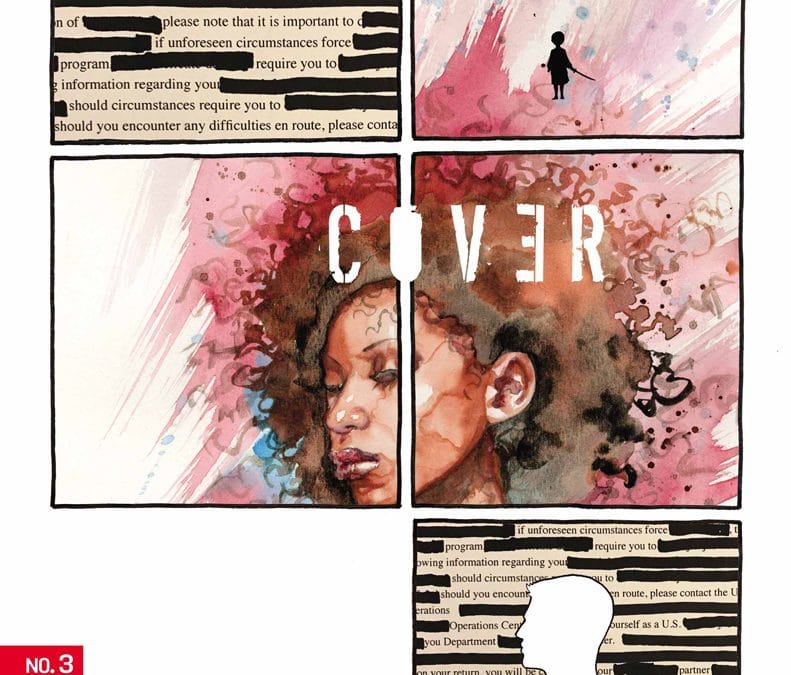 Cover 3 Review 10/10: comic con creator spy showdown breaks out amidst the most unlikely of scenarios, and Max Fields is swept up in the direst of consequences.

Should Max have ever agreed to moonlight for the CIA, however simple his role or staunch his patriotism?

Cover 3 crafts a deeply impactful conglomeration of art forms to flesh out the resonating characters masterfully.

Cover 3 from Jinxworld is Created by Brian Michael Bendis and David Mack, with Essad Sinns’ Art by Bill Sienkiewicz, Digital Coloring by Zu Orzu, and Lettering by Carlos M. Mangual, and a noir-esque Variant Cover by Nick Derington.

The following review of Cover 3 contains SPOILERS***** for the series.

We know from Cover issue #2 (read about it here, folks) that Max is tied to a chair and beaten for information by fellow comic creator Essad Sinns.

And yet the next book starts off with Max’s own comic, Ninja Sword Odyssey.

The son of the samurai-turned-ninja has his own story and it is progressing in the wake of his father’s death.

The words ring home: ‘In the night, we wore our cover.’

And then the story pivots drastically.

Cover 3 is edited, like Pulp Fiction, for gut-wrenching suspense.

An incredible dive into Max’s next project reveals an astronaut floating above a vibrantly water-colored planet who receives horrible, life changing news.

And then Essad is tearing into Max’s work, calling it ‘shit’ and hurling art pages across the room.

Max is tied to a chair, and his captor is menacing.

Yet the two peers rank on each other’s work, and it even touches a nerve in the interrogator, as he self-consciously asks if Max still likes ‘[his] painting.’

The scene is fantastically built within slate and black shadows, humor and intense danger, with an Ian Fleming-like feel.

When Essad wants to know what Max did next, he relays an awful experience.

On a blind date Max’s colors gradually fade, with his interest in the woman seated with him.

She cannot see, or take seriously, the beautiful connection between fans who want to ‘live in the skin of their favorite character . . . in the real world.’

And perhaps worse than that, she does not care that Max is moved by his own fans’ cosplay.

The comic book creator and fan boy (or fan girl) quips add enough true-to-life hilarity to give a touching account of the connection between artists and their appreciators.

And the painfully funny art of explaining to people with 9-5 jobs that artists working from home still work every day is all too true.

And it acts as further comedic relief (as many great thrillers need) amidst the damnable predicament.

Max is still caught and tied to a chair.

The reader needs to take a breath amidst the espionage intensity and the overbearing present condition that Max finds himself in.

We meet Julia as she greets Max at a comic convention in France.

She pushes Max to get to know Essad.

And Essad is not buying it.

The chair is knocked over and the beating commences.

Make no mistake, the realistic perspectives of the comic book creators, of the passionate fans, and the operatives, like Julia, drive this tale, like an Aston Martin DB5 furling bullets and speeding on.

Max’s art, past and present, combined with Essad Sinns’, is intertwined within Bendis and Mack’s tale so that it has significant impact on the protagonist and reflects emotions, actions, foreshadowing, and suspense.

The artwork, from panel to panel, page to page, speech-bubble to speech-bubble, forms a riveting and poignant experience.

Go grab this book at your LCS before it sells out! I have never seen a story told in this medium like this before. 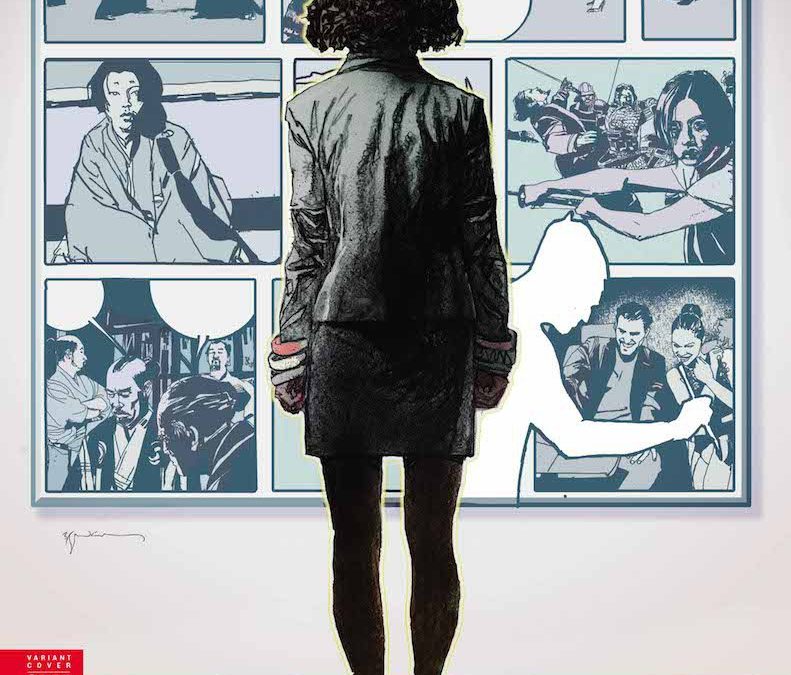