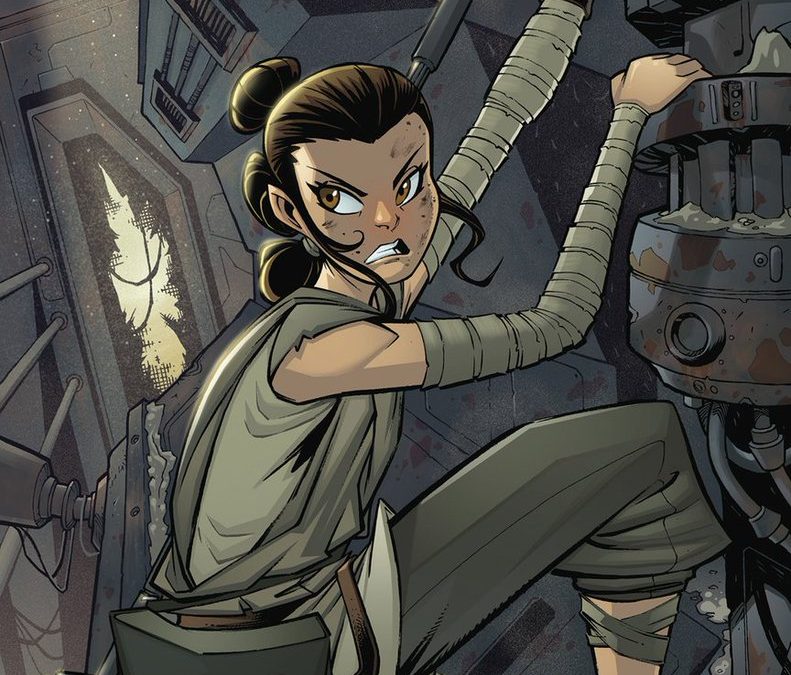 “Star Wars Adventures Amazes Readers Of All Ages” sums it up perfectly, and Rey kicks off the book spectacularly.

The newest comic book anthology from IDW, not Marvel Comics (they have the adult-based books), Star Wars Adventures gives the youngest of kids to the grayest of graybeards, alike, something to revel in: an all-out thrill-ride of stories from all over the Star Wars universe made for all Star Wars fans!

The first story arc is about Rey’s exploits before The Force Awakens.

The Jedi to be is thrust into the shady scavenger strife surrounding Jakku’s Niima Outpost, and the array of Star Wars The Force Awakens characters, especially the obscure ones are being revealed.

And Rey is every bit as resourceful, bold, and kick-ass a young woman before she found the Skywalker lightsaber, as she was in the The Force Awakens.

The book’s creative work by writer Cavan Scott and artist Derek Charm is innovative and intriguing.

Charm’s artwork is a unique menagerie of style!

The 2-D cartoon-like look on the surface holds a lot of detail in each panel: the faces are full of emotion, the armor is glinting in the light of Jakku’s suns, and in the shadows of Obi-wan Kenobi’s robes and beard.
Scott’s writing is top notch.

He brings familiar voices to light, as well as giving further interest, accents, and local colloquialisms to the myriad characters of the Outer Rim and the remnants of the Republic.

Scale a desert-claimed crashed Empire ship, and get immediately thrust into not just a struggle to eat, but a struggle to survive an ambushing attempt from rival scavengers!

Our favorite lump of an enormous alien, Unkar Plutt, is a key to the new Rey tale in this premier Star Wars Adventures Issue #1 and the books to follow.

He is kidnapped for his role in selling parts of a droid of interest to some dark and unsavory mystery marauders.

When Rey realizes Plutt’s protection of her has left her open to being attacked, robbed, and possibly killed by her scavenger competition, the stakes are raised and she stands fearless and daring, fighting for her keep.

With Plutt out of his hut sitting atop the heaped throne of junk, another crime boss comes in to the Niima Outpost to take over the trade.

Meanwhile, Plutt is not revealing anything about the mystery droid, and as this tale’s first part closes, Rey is seen in her dwelling with its head.

The shorter story of the book is one of Obi-wan Kenobi, at his favorite diner, as he works to help out a familiar friend who has been the target of a thief.

​”Star Wars Adventures Amazes Readers Of All Ages” was written by R.J. Huneke.

Be sure to head down to your local comic shop for Star Wars Adventures #1 and the many different and brilliant covers, including the awesome variant (see picture above) starring Rey that this writer picked up at Red Shirt Comics in downtown Port Jefferson – where there is now an “All Ages” section dedicated to the best stories for folks of any number of birthdays under their lightsaber belts.